In preparing this transport strategy, the NTA took into account a vast array of policies, guidelines, plans and programmes of a large number of international, national, regional and local bodies and agencies, including the UN Sustainable Development Goals, the Climate Action Plan 2019 and recent climate action legislation, and local authority development plans.

In preparing this transport strategy, the NTA took into account a vast array of policies, guidelines, plans and programmes of a large number of international, national, regional and local government bodies and agencies. These included the UN Sustainable Development Goals, the Climate Action Plan 2021 and recent climate action legislation.

This chapter focuses on a key input into the Transport Strategy – the Climate Action and Low Carbon Development (Amendment) Act 2021, which sets out emissions reduction targets on a statutory basis.

Detail is also provided on the two primary statutory policy documents which, from a policy and integrated planning perspective, have most directly framed the Transport Strategy:

The Transport Strategy is required by legislation to be consistent with these plans and a close iterative relationship is required between them.

Other policy documents considered are listed at the end of this section.

“Planning and transport policies are highly interdependent. Establishment of the National Transport Authority (NTA) in 2009 was intended to deliver a more focused and integrated approach to the planning and delivery of integrated transport infrastructure and services both on a national basis generally and especially in the Greater Dublin Area.”
Government of Ireland, 2018 National Planning Framework

In July 2021 the Climate Action and Low Carbon Development (Amendment) Act 2021 was signed into law.

“The State shall, so as to reduce the extent of further global warming, pursue and achieve, by no later than the end of the year 2050, the transition to a climate  resilient, biodiversity rich,  environmentally sustainable and climate neutral economy.”

To achieve that objective the Act sets out a number of actions. These include:

The Act provides that the first two five-year carbon budgets should equate to a total reduction of 51% over the period to 2030, relative to a baseline of 2018. While that overall target has not yet been disaggregated into sectoral targets, it is understood that the transport sector will be required to achieve this 51% reduction in full.

This is a highly significant and challenging target, which will fundamentally guide and direct transport provision and use in Ireland over the next decade. Achieving this target will require a major transformation in transport patterns, focused on increasing travel by sustainable modes and reducing travel by petrol/diesel powered vehicles.

The NPF is a strategic development framework that sets out the long-term context for Ireland’s physical development and associated progress in economic, social and environmental terms until 2040. These are set out under a number of National
Strategic Outcomes and Priorities, as illustrated in Figure 4.1.

The various policies within the NPF are structured under National Policy Objectives (NPOs). NPOs were developed following extensive analysis and consultation and set a new way forward for regional and local planning and sustainable development policy in Ireland.

The key NPOs relevant to the development of the Transport Strategy include: 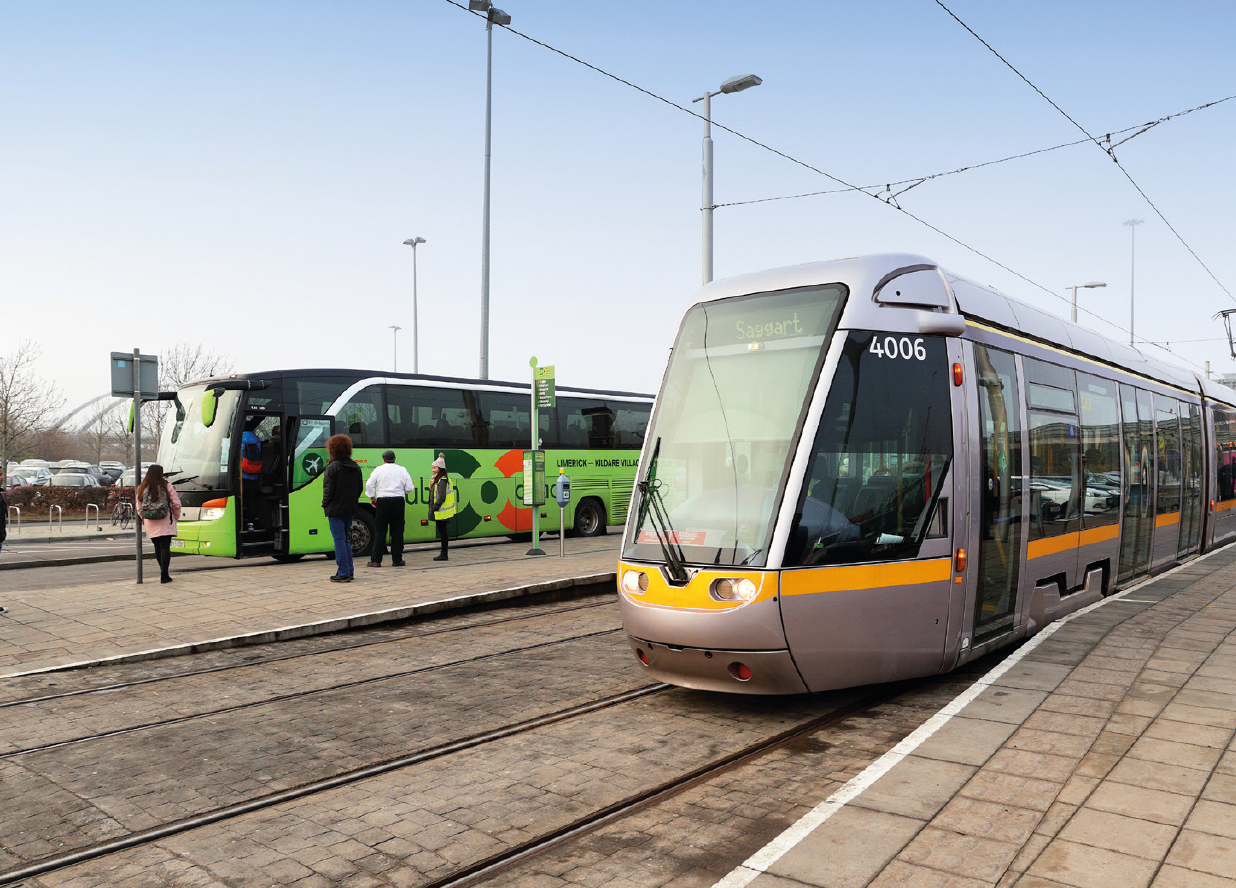 The NDP sets out the investment priorities that will underpin the successful implementation of the NPF up to 2030.

National Strategic Outcomes (NSO) defined by the NPF have been incorporated into the NDP with further investment details. Some of the projects of relevance to the Strategy are summarised as follows:

NSO 8 – Transition to a Low-Carbon and Climate-Resilient Society

The RSES provides the spatial framework for alignment of key transport infrastructure and investment throughout the Region, setting out  locations for population and employment growth, with a focus on delivering compact growth within existing urban footprints in Dublin and designated settlements in the RSES Settlement Hierarchy.

Key transport policies which were developed in collaboration with NTA include Guiding Principles for Integration of Land use and Transport, and Transport Investment Priorities for the Region.

The following RPOs of the RSES are of most relevance to Transport Strategy:

The RSES also incorporates the Dublin Metropolitan Area Strategic Plan (MASP). This plan includes a number of guiding principles and identifies the strategic development corridors for accommodating future growth. It also sets out the enabling infrastructure, including transport. The MASP comprises a key input into the transport strategy by providing clear direction in terms of spatial planning policy at the Metropolitan level.

The Strategic Development Areas and Corridors identified by the MASP are set out below along with a selection of the identified enabling transport infrastructure:

The following Regional Policy Objectives are included as part of the MASP:

The MASP also sets out the potential growth of the Strategic Employment Development Areas, which include:

A further set of RPOs detail the EMRA’s support for the transport schemes and projects set out in the Transport Strategy for the GDA 2016-2035. The NTA has taken the above objectives, the population and employment forecasts, and the outcomes of our detailed liaison with the local authorities which translated the regional forecasts into local areas, and has prepared this Transport Strategy as a transportation response to the demand set out by the land use agencies. In this manner, the Transport Strategy has been developed to be consistent with the RSES, incorporating the MASP, in line with the relevant legislative requirements. 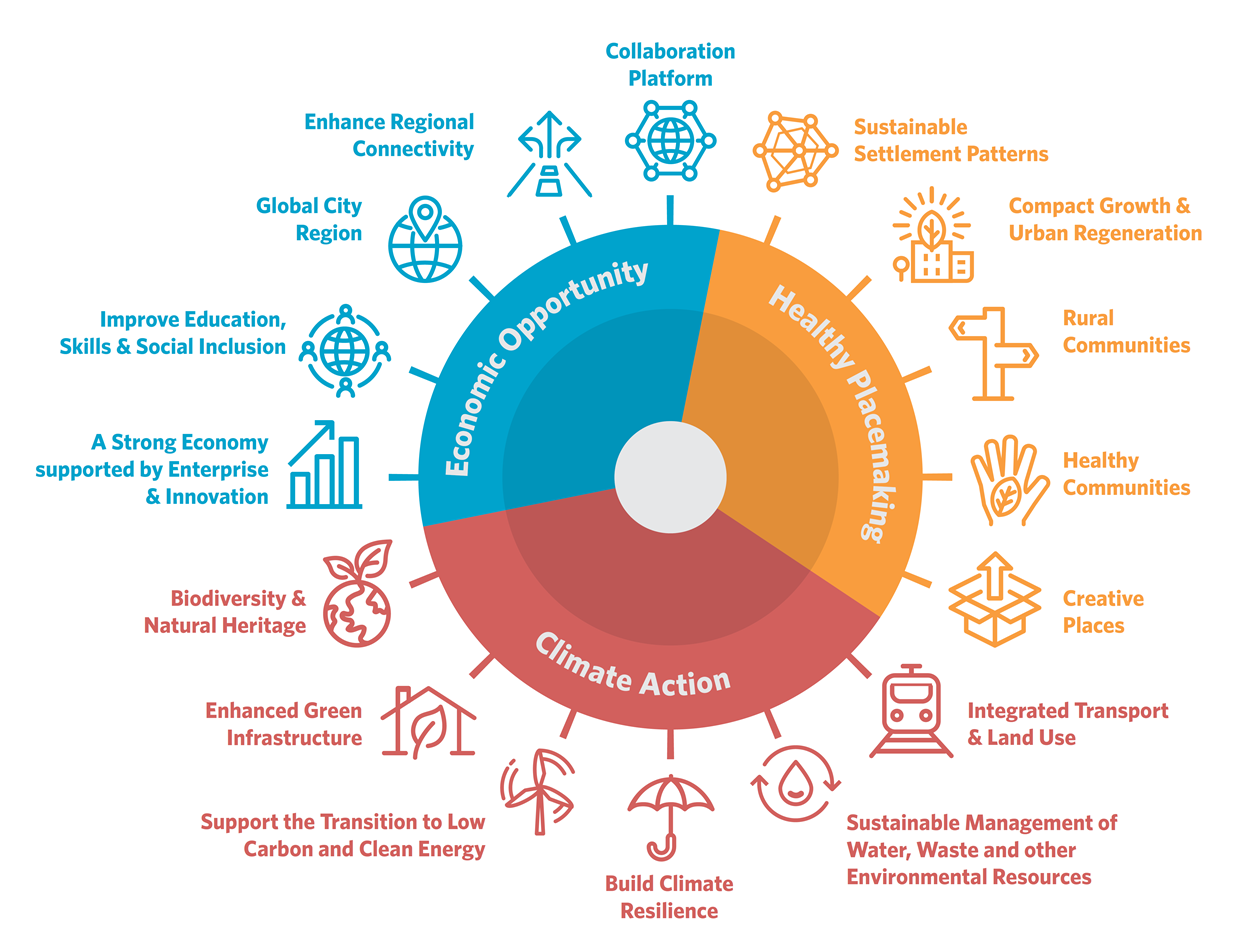 The following policies and plans have also been taken into account in a number of ways in preparing this Transport Strategy. They have assisted in crafting the strategy’s aims and objectives, provided direction in terms of future land use patterns, set out overarching government policies; and provided detailed guidance on how best to deliver the transport strategy.

6 submissions have raised observations relating to this chapter

View graphs and filter submission data for this consultation